The Ce/H2 redox flow cell is a promising system for large-scale energy storage due to its high open circuit potential (OCV) relative to other aqueous systems.[1] The system consists of an electrochemical cell which is fed reactants from storage tanks containing gaseous hydrogen (negative side) and an aqueous solution of Ce3+ and Ce4+ (positive side). During discharge, hydrogen is oxidized to protons at the negative electrode. The protons pass through an ion-conducting membrane and react with Cerium(IV) methanesulfonate at the positive electrode to produce Cerium(III) methanesulfonate and methanesulfonic acid (MSA). The electrochemical reactions are shown below with the forward direction corresponding to discharge and the reverse to charge.

Previous work by Hewa Dewage et. al established proof of concept for this device, demonstrating ~150mW/cm2 peak discharge power using platinized titanium mesh cerium electrode and commercial Pt-on-carbon paper hydrogen electrode.[1] In this work, we further optimize the cell materials, electrolyte composition, and operating protocol. It is found that Pt mesh type and surface area, membrane pretreatment, MSA concentration, and upper cutoff voltage have a large impact on performance. Optimizing these parameters results in power density exceeding 650 mW/cm2, as shown in Figure 1. Cell cycling efficiency is shown as a function of current density in Figure 2. Energy efficiency of 90% is achieved, although at low current density. Inefficiency is dominated by voltaic losses, which are thought to arise from kinetic and mass-transport limitations in the cerium electrode.

This paper will discuss the optimization effort in detail, as well as initial cycling stability results. Based on these results, we conclude that the cerium/hydrogen redox flow cell is indeed a good candidate for large-scale energy storage, due to high cell voltage, promising power density and energy efficiency, and reasonable cerium solubility. Future efforts should focus on developing improved cerium-electrode structures and catalysts, and determining durability of the cell. 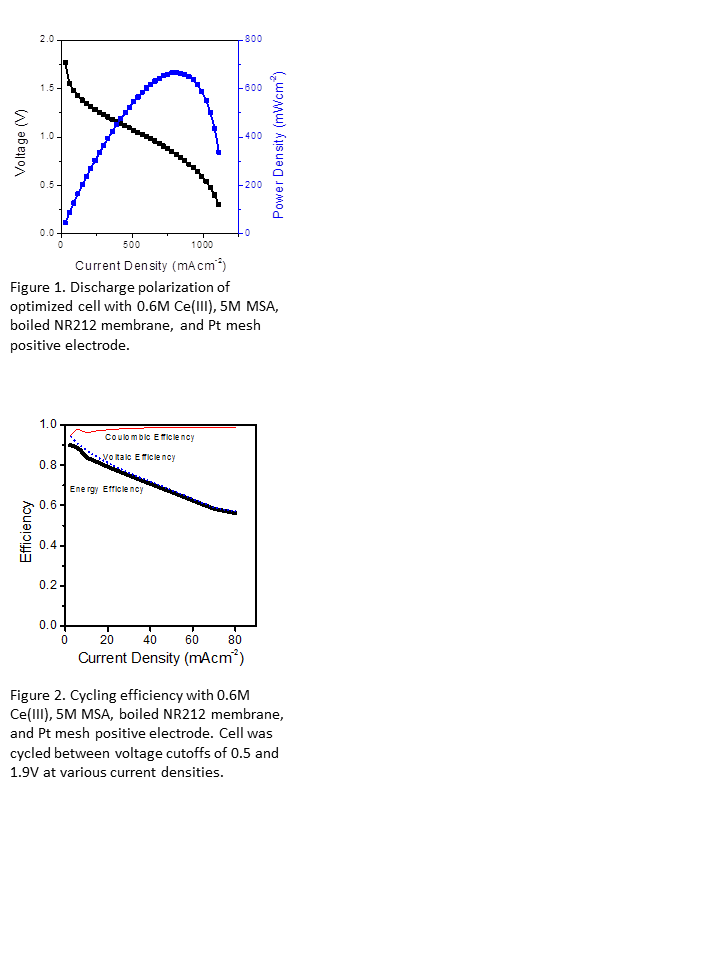